Welcome to CPARG - Cambridgeshire and Peterborough's local Amphibian and Reptile Group. ARGs are local, grassroots amphibian and reptile conservation groups spread out throughout the UK, usually organised by county. As a volunteer run group we get up to a whole range of activities – newt surveys, frogspawn counts, advice service, liaison with planning authorities and consultancies, data collection/collation, training, chytrid swabbing, talks and presentations. The opportunities are endless! Events are held on nature reserves and throughout the wider landscape, and while our focus is on Cambridgeshire there are good links between neighbouring ARGs with access to shared away-days, conferences and training available.

We are run by and for volunteers, and we'd like you to join. We're looking for members – people who might be interested in surveying, receiving training, attending talks, sharing their knowledge and experience, or getting involved in any way with amphibian and reptile conservation locally. We're also looking for new committee members to help with the running of the group, most importantly in organising and/or running events (surveys, training, talks, habitat management etc).

Map of some sites we work on:

Please join our Facebook for discussions with other members.

Please follow our blog for updates on our events and activities!

Posted on Thursday 22nd March, 2012
Full details on this training event are now available on our events page.

Posted on Wednesday 8th February, 2012
We are re-launching CPARG and will be putting on a range of activities throughout the year and across the whole county, working with various landowners and existing wildlife groups.  All ARGs are run by and for volunteers, and we’d like you to join.  We’re looking for members – people who might be interested in surveying, receiving training, attending talks, sharing their knowledge and experience, or getting involved in any way with amphibian and reptile conservation locally.  We’re also looking for new committee members to help with the running of the group.  In the first instance we’ll need a Secretary and a Treasurer, but there’s a host of other roles which could usefully be created as the group grows (e.g. Events Officer, Training Officer, Data Officer, Press Officer etc).

If you would like more information, to get involved or to be kept informed please email paul.furnborough@sjc.oxon.org to be added to the announcements list.  If you’re interested in joining the committee or if you are a land owner/manager who is interested in involving us with your site please get in touch either by email or on 07508020437 after work hours.  A website and facebook page will be launched shortly to keep everyone updated on what’s on.

Recent research as identified that urban ponds provide numerous and diverse roles including their ecological function with good quality ponds acting as stepping-stones and refuges for wildlife species within a suriunding of otherwise inhospitable habitat. With this in mind, we are currently looking to find out where all of Cambridge's urban ponds are in an attempt to learn more about the potential dispersal routes of the City's amphibians. It is important to know both where amphibians breed (in terms of public areas) but also where they may also hibernate, which is usually away from breeding ponds and in gardens. Of course amphibians will also breed in garden ponds too and this is useful additional information that we are hoping that you, the constituents of Cambridge will be able to help provide us with. If you're happy for us to make a visit to your garden to survey the pond or give you some advice on how to improve your pond or garden or amphibians then please also let us know of your address. If this is not the case, then please provide us with a grid reference of your pond's location which you can easily find using this free online tool. 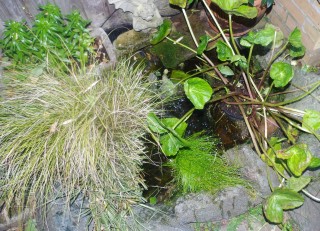 Even small garden ponds like the one above can offer plentiful opportunities for amphibians to breed and feed. If you do have a garden pond, the please do get in contact and let us know what species of amphibians you find in it, whether it is stocked with any fish, how old the pond is and how big it is. It is hoped that this information will be used to help inform planning and management of urban areas within Cambridge to benefit amphibians and other wildlife which tend to share the same corridors.

Disclaimer: Any data you share with us will not be shared with any third party groups without your permission first.

CPARG prides itself with the important conservation research that the group runs throughout the county. Below are short summaries of some of these projects and information on how you can get involved.

CPARG monitors a number of amphibian populations around the county with the majority of the committee being great crested newt licence holders. There are sites of interest throughout Cambridgeshire which are home to the four most widespread amphibian species, common frog, common toad, smooth newt and great crested newt. A small number of sites are also home to some rarer species (for Cambridgeshire at least), such as the palmate newt. These are generally surveyed at night using a combination of methods such as torchlight surveys and bottle trapping. To get involved, keep an eye on our blog and our events.

Toads on Roads is a national initiative which aims to help set up and manage toad crossing across the country. Roads are a huge issue for amphibians, with the main threat being that of cars. Roads bisect amphibian migration routes between breeding ponds and over-wintering sites and so the aim of a toad crossing is to help as many toads as possible make it to the other side of the road. There are a number of registered toad crossings within the county, with one of CPARG's most active ones is in central Cambridge. Every year we are on the lookout for volunteers to help us with toad patrols throughout the county.

Toads have declined around 70% in the UK in the last thirty years, and being hit by cars is one of the main causes. The toad patrol is one way of making a real difference to protecting these remarkable amphibians. The toad patrol is active through the toad breeding season, usually from mid-February until April. Volunteers give the toads a helping hand, so that as many as possible make it safely across the roads to their breeding pond to spawn. Each patrol has it's own coordinator who helps to organise a rota, with volunteers signing up for between one and three hours around dusk, on nights when the toads are active. All you need is a bucket and a torch.

Since 2015 CPARG has been monitoring the population of midwife toads (Alytes obstetricans) in central Cambridge. The study first started out as a population assessment but then quickly transformed into a disease monitoring exercise. It was feared that when the toads were introduced that they may have been infected with infectious diseases that are deadly to amphibians. These do not affect humans but they have caused huge declines in species around the world. Fortunately so far  no toads have come back positive for the amphibian chytrid fungus (Batrachochytrium dendrobatidis). We'd like to thank the local residents for allowing us access to their gardens to carry out this important research. If you'd like to know more then please contact Steven Allain.

Falling Through The Cracks

CPARG is always happy to welcome new members whether they be amateur amphibian and reptile enthusiasts or professional ecologists. This mix of backgrounds helps to give CPARG it's strong dynamic. If you'd like to know more about membership and the benefits provided, please feel free to contact us before you join. To find our about how CPARG is operated, please feel free to read the CPARG Constitution (available here). If you've got a membership query, please contact Helen Moore, our Membership Secretary.

Before you download and fill out your membership form, please read the ARG UK Generic Risk Assessment and ARG UK Lone Working Procedures. The membership fee is £5 and payment instructions can be found on the membership document below. Alternatively you can become a member by using the 'Subscribe' button below and paying via PayPal.

ARGWEB is the online system that CPARG uses to monitor sites, manage it's data and assist in various administrative roles. You can log-in using the button below and record your sightings and us ARGWEB's many other features.

To submit photos of events, species or habitats to our gallery please email Mario Shimbov or alternatively upload them to our Facebook page and make it clear you'd like to see the photos posted on the website.

If the answer you need is not there please contact our Advice Officer, Malcolm Busby.

If you've seen what you suspect to be a non-native species then please contact Steven Allain.

We have a small team dealing with possible wildlife crimes committed against herp species - please contact Steve Parnwell who will liaise with the team.