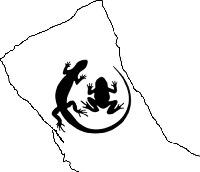 In partnership with the rangers of the Wirral Council Parks and Countryside Department, the Wirral Amphibian & Reptile Group have initiated a project in Royden Park for Great Crested Newts (Triturus cristatus).

Records for this protected species have been diminishing in Royden Park, as well as other parts of the Wirral. This species has historically declined across Europe, hence its protection status. While it has stabilised and even grown in parts of Britain, it is clear it is in decline on the Wirral based on historical data. The last observation of Crested Newts was two years ago. So, we did a walkover of Royden Park to assess the habitat quality - while the terrestrial habitat of woodland and meadows is fine, the breeding habitat was found to be average to below average for Crested Newts. This included dense shading of ponds by tree growth. One pond was full of invasive New Zealand Pygmyweed. Another (where most historical records from the 1980s were) had practically disappeared, apparently from siltation.

So, we made a plan: each pond would be subject to management practises to bring up their Habitat Suitability Index. This included reducing shade to the ponds, so aspects such as aquatic plants can proliferate, which is good for breeding habitat, and possibly also for the newt's prey: aquatic invertebrates [maybe explained by "green" food webs are empirically found to be more productive than "brown" food webs].

The plan has begun implementation: Last week, a work team that included WiARG volunteers Tom, Kieran & Nathan with rangers Paul & Rosemary and a large team from Friends of Royden Park. We focused on the pond by the meadow. Paul was cutting the larger trees down with the chainsaw, while the rest were clearing the meadow of Turkey Oak (an invasive alien species that has not had as much awareness, see: https://www.woodlandtrust.org.uk/trees-woods-and-wildlife/british-trees/a-z-of-british-trees/turkey-oak/) which has been popping all over and threatening to outshade all the sun-dependent grassland species in the meadow and will likely threaten even woodland species (including the english oak). 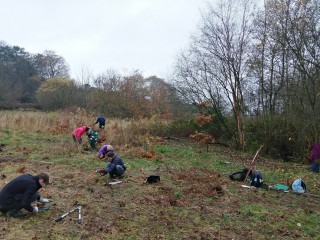 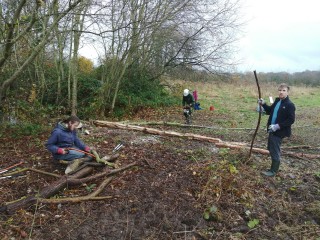 As lots of wood was accumulating, we use it to create some hibernacula. This would act as shelter for newts, other amphibians like frogs and toads, as well as other smaller animals to hibernate during winter. I could also provide basking spots, as well as perching spots for birds, and the wood might even become a substrate for fungi to grow. So an effort to protect one species is benefitting others (theoretically!). 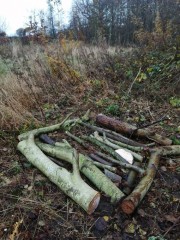 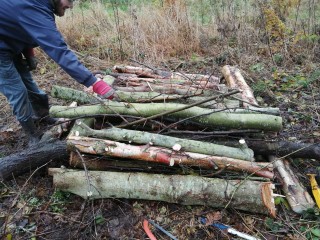 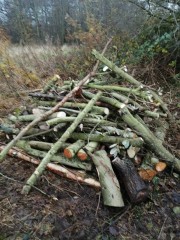 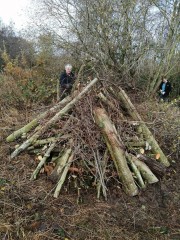 So that one day we made a lot of progress, finishing with the south-facing side of the meadow pond now more expose to the sun, one hibernacula and another started, and the meadow cleared of Turkey Oak. We shall be returning to work on this pond a bit more, then onto another one. In the Spring we shall start monitoring the population of newts. The initial plan was to survey the newts first then do the management, but the population might disappear by then, and this habitat management is already confirmed to benefit their population, but the newts could disappear through non-breeding if we do not act now!

In addition to our group's physical activity, the ranger Paul used our advise to direct management for another pond in Royden. The Wirral Evolutions group, which helps people with learning and physical disabilities reach their potential, took the initiative to remove the New Zealand Pygmyweed from one pond. This involved simply scooping out the weed and leaving it on the side of the pond for any aquatic creatures to return to the pond. As this plant is massively invasive, it could not be moved further in case of escape to another water body and will require constant control each year to stop it becoming dominant. This pondweed can actually remove the water column from a pond, and is sub-optimal for newts to lay their eggs on. However, for the breeding season of Spring 2020, the pond is more suitable for newts to breed in. Great work guys! 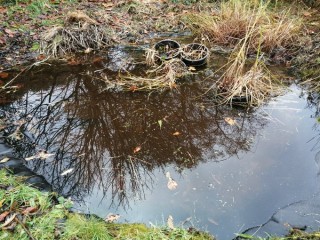 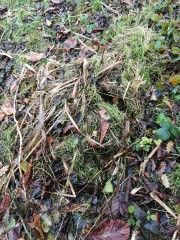 We have another task day planned for the weekend, Saturday 7th December. Thereafter, tasks will continue into January and February. Keep an eye on this website, Twitter and Facebook pages for updates. If you want to be added to the email list and become a member, email the chairman: tommy_dbone@yahoo.com.

Due to heavy rain forecast for Saturday the 8th June, the planned survey of reptiles at Harrison Park Wallasey has been rescheduled to the following Sunday the 9th.

Today's reptile survey cancelled: The cloud cover is letting no sun through, so won't be warming up the refugia. Will reschedule for another day soon.

Last Thursday, Tom, Frankie and James got out to Harrison Park and the weather being bright, we got plenty of Common Lizard (Zootoca vivipara), including numerous males with signs of injury that might be masculine combat, but maybe also from predation by corvids. Artificial refugia has now been put out around the area that was burned last year, and the hill where most dog walkers go, no lizards seen yet but there have been incidental reports. Will be an interesting case study.

Today some of us went out to Harrison Park to check under refugia for what was found to be a thriving Common Lizard population last year. We were joined by Vicky Handby from Year of the Environment as we helped to contribute to the City Nature Challenge using the iNaturalist app, attempting to help the Liverpool City Region to compete against the likes of Los Angeles and darkest Manchester.

The weather forecast for this Monday's surveys in the North Wirral Coastal Park are looking better, so there will be better chances of meeting lizards, also amphibians. That will be the last day of the City Nature Challenge.